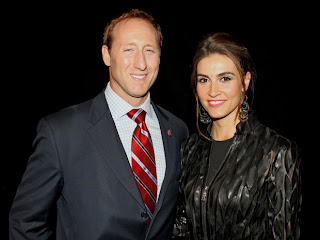 In defence of our Defence Minister, Hon. Peter MacKay, I would say he has chosen well. Clearly he  made several attempts but was not afraid to let go and move on until the fit was right. Now paired with a former Miss world runner up it would not be surprising if there are some little pitter patters around Parliament Hill soon. According to a 2005 report McKay puts a high price of family and would even trade being a prime minister of the country for a family.
You cannot blame a man for wanting the best for himself and I hope that Ms Nazanin Afshin-Jam would work out and stick around for the long haul.
It is a good show of diversity in Canada. Former NDP Leader Jack Layton had paired nicely with an immigrant woman and now our Defence Minister has also paired with a powerful woman who is not only fantastically beautiful but a social activist and has earned her right to be taken seriously and not as just an eye candy or accessory for the Minister.  Ms Afshin-Jam is the founder of Stop Child Executions, a group dedicated to ending capital punishment of children in Iran and was also a Board member of Canada Race Relations.
I hope this twinning of the two cultures would open the way for peace dialogue between Iranian government and Canada and form a powerful political liaison to  benefit Canada.
Congratulations to Mr. McKay for finally finding his bride. I wish him all the happiness in the world and lots of children.
Posted by Unknown at 8:57 PM