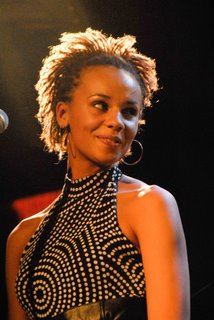 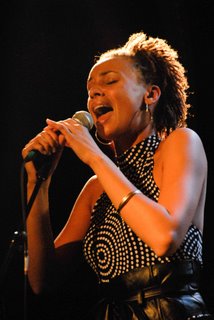 Maiko Watson - A old new Buzz in the Winnipeg Scene

Maiko Watson made her solo debut at the recent Western Canada Music Award held in Winnipeg. She was generously backed up by Dr. Rage and the Uppercuts - a fairly new band on the cutting edge in the music scene. They are slowly making a name for themselves.
Maiko did a 20 minute set singing five of her own songs that she wrote and produced.
From the response from the crowd I knew she had hit the spot. Her set was professionally executed and Maiko was great. Her voice has matured to wonderful sweetness that tints that maturity with a fresh girlish sweetness. She is easy to listen to and her lyrics carries a good punch.
Maiko rang has improved from her Sugar Jones days when the teeny bopper, part of a girl group, belted out "Days like that" and others. She is a force to be rekoned with. Maiko said she is taking it a step at a time and is in no rush to get to the top. "It's not the destination that matters to me, it is all about the journey".
Posted by Unknown at 3:17 PM No comments: