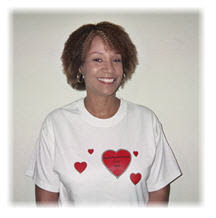 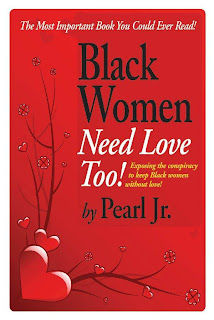 Attention Black Women of the World
If you are not getting the love you deserve you might want to pick up this book and read it. There appears to be a conspiracy to deny Black women this right. A brand new book by Pearl Jr
Posted by Unknown at 9:46 AM 1 comment:

Kwanzaa - A Celebration of African Heritage 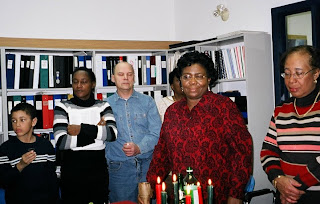 
Kwanzaa, which means "fresh fruits," is a week-long celebration that runs from Dec. 26 to Jan. 1. In this time, a different principle is celebrated each night through African proverbs, songs, chants and gift giving. Gifts normally include a traditional African heritage symbol and a book to stress ethnic values.

Kwanzaa was created in 1966 by Maulana Karenga, then the leader of the Us Organization, a black nationalist group. His goal: "To give blacks an alternative holiday to Christmas." Today Karenga is a professor of black studies at California State University. The seven principles of Kwanzaa also correspond to Karenga's notion that "the sevenfold path of blackness is think black, talk black, act black, create black, buy black, vote black, and live black," which he asserts in his book The Quotable Karenga.


During Kwanzaa, families decorate their homes with harvest symbols and other ethnic artifacts and dress in traditional African garb that exude the colors of Kwanzaa--black (to symbolize the people), red (to represent the bloodshed and struggle for equality), and green (representing hope for the future).

Traditionally, there is a central decoration that holds seven candles: three red candles, three green candles and one black candle (which is lit on the first night).
Posted by Unknown at 8:56 AM No comments:

Labels: Annual Celebration, Congress of Black Women, Kwanzaa
It's Not over Yet - Celebrate the African Heritage Season - Kwanzaa
Kwanzaa is a time to celebrate African heritage and further strengthen core family values using seven African principles: umoja (unity), kujichagulia (self-determination), ujima (collective work and responsibility), ujamaa (cooperative economics), nia (purpose), kuumba (creativity) and imani (faith). It's also a time to entrench oneself in four decades of tradition.
In 1966 Dr. Ron Maulana Karenga adapted the principles of the African harvest festival to create the African American celebration known as Kwanzaa. He emphasized that the same principles could be used in building strong and wholesome communities.

Kwanzaa, which means "fresh fruits," is a week-long celebration that runs from Dec. 26 to Jan. 1. In this time, a different principle is celebrated each night through African proverbs, songs, chants and gift giving. Gifts normally include a traditional African heritage symbol and a book to stress ethnic values.
During Kwanzaa, families decorate their homes with harvest symbols and other ethnic artifacts and dress in traditional African garb that exude the colors of Kwanzaa--black (to symbolize the people), red (to represent the bloodshed and struggle for equality), and green (representing hope for the future).

Traditionally, there is a central decoration that holds seven candles: three red candles, three green candles and one black candle (which is lit on the first night).
Posted by Unknown at 8:56 AM No comments: 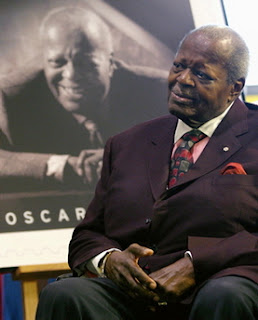 A National Treasure has Slipped off this reality

Our beloved Oscar Peterson, a national treasure and one of jazz's most recorded musicians, both as leader and accompanist died at the age of 82. Peterson rose from working-class beginnings in Montreal -- where his father, a railway porter, let him pursue music only if he promised to be "the best" -- to become a major influence on generations of top-flight musicians.
"He was very shy, very down to earth. You didn't know you were with a world musician by any means," said Hazel McCallion, a friend and the mayor of Mississauga, Ontario, a Toronto suburb where Peterson lived.
McCallion said that Peterson died late on Sunday and that she was informed by Peterson's family. CBC Television said he died at home of kidney failure.
Since blasting onto the world stage with a famous appearance at New York's Carnegie Hall in 1949, the beefy high school dropout amassed armfuls of honorary degrees and awards, including a 1997 Grammy for Lifetime Achievement and an International Jazz Hall of Fame Award.
Canada made him a Companion of the Order of Canada, the country's highest civilian honor, as well as the first living Canadian to be depicted on a stamp.
Peterson kept an exhaustive touring schedule throughout his career with groups featuring such players as bassist and longtime collaborator Ray Brown, drummer Ed Thigpen and guitarist Herb Ellis.
The work of this musicians will continue in the likes of Holly Cole and other top brass Jazz artists in the city. He will be studied and remembered for his excellent skills in this particular musical genre Jazz.
Posted by Unknown at 8:22 AM No comments: 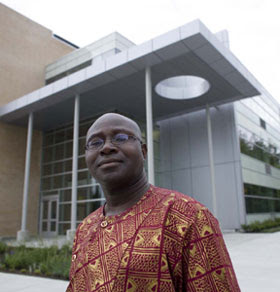 Dr. Charles Quist-Adade, a faculty member of Kwantlen university and prolific writer and journalist was last night elected president of the Ghana Canada Association of British Columbia at the Executive Plaza hotel in Burnaby.

According to its web site, the GCABC was formed in 1986 by a group of Ghanaians living in Vancouver, British Columbia. It is a non governmental and a non profit organization.

GCABC cooperates with other humanitarian organizations and communities but has no political or religious affiliations. The aim of the association is to promote friendship, co-operation and cultural exchanges between the peoples of Canada and Ghana. The association aims at increasing the knowledge of Canadians about Ghana and developing countries in general. It aims at influencing the society’s thinking, the authorities and the individual’s sense of responsibility towards the problems of developing countries.

Charles Quist-Adade(pictured)was born in Ghana, where he obtained a Diploma in Journalism from the Ghana Institute of Journalism before earning an M.A. in Mass Communication from Leningrad State University and Ph.D. in Sociology from Petersburg State University, both in Russia. Prior to his arrival in Canada, Dr. Quist-Adade worked as a newspaper 2004 Black Community Leadership Award Recipient journalist and radio broadcaster for the Ghanaian Times and Ghana Broadcasting Corporation, as a press officer for the Hungarian Embassy in Accra, Ghana, and as a correspondent for the London (U.K.) - based syndicated Gemini News Service in Leningrad. He was a contributor to the British Broadcasting Corporation (BBC) African Service and for London-based magazines, including New African, Africa Events, West Africa and African Concord, and published articles in newspapers around the world including the United States and Canada.

Besides teaching, Dr. Quist-Adade has taken a great interest in supporting Windsor’s Black community. He has for many years published Windsor’s Black community-oriented newsmagazine, Sankofa News, with the assistance of communication studies students from the University of Windsor. He has also acted as editor of the Multi-cultural News out of Toronto. Dr. Quist-Adade has to his credit more than 300 newspaper articles. His academic publications include the book Africa in the Shadows of the Kremlin and the Press: Africa’s Media Image During and After the Cold War (2001) and a chapter in the book Africa, the Kremlin and the Press by Lawrence Erlbaum Mahmah.

He is also the producer of The Ones They Left Behind: The Life and Plight of African Russians, a documentary film on the offspring of Black student fathers and Russian mothers and the experiences of these children in the (former) Soviet Union.

From September 1992 until August 2003, Dr. Quist-Adade produced and hosted CJAM’s Safari Pan-Afrikana, a weekly radio program featuring news, music, and commentaries on issues concerning continental Africa and the African Diaspora. Through the radio program and the Sankofa News, he has lent support to many Black community causes, as well as promoting unity and co-operation among all segments of Windsor’s Black community.

On February 14th, 2004, while he was a faculty member at Central Michigan University and still commuting to the Windsor area on a monthly basis for a variety of volunteer commitments, the Windsor and District Black Coalition awarded the 2004 Black Community Leadership Award to this dedicated leader and volunteer whose many contributions to the Black community of Windsor and region will never be forgotten.
Posted by Unknown at 8:16 AM No comments: 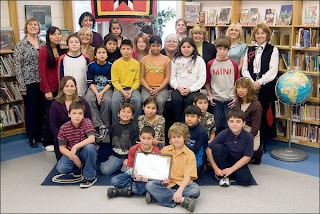 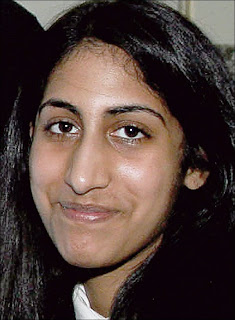 We promote Human rights as an important value in the Western countries but we do not see that importance reflected in the media when it comes to International Human Rights Day. The scanty coverage in mainstream media will give you the impression that it is not that important. December 10 was International Human Rights Day. I think this is a day we all can and should celebrate regardless of race, creed, political beliefs and nationality. We all want our rights protected. Why is the media not playing up this event more than it does. Why are stories not researched etc. to show the benefits and beneficiaries of human rights.
In Winnipeg there is no complaint this year. We had a lot of media press around the Human Rights Commitment Award. This year the criteria for the Commitment award focused on the rights of the mentally ill. A FASD program that runs out of the David Livingston school was the winner. This program helps children with Fetal Alcohol Spectrum Disorder to take their rightful place in society and to banish myths about children and people with this disorder. The children in this program were very happy to receive the award. In accepting the award, one of the children said they are just the same as every body, they just need a little more help than other children to do the right thing. He said they know right from wrong. The children were so sweet and touching. There was not a dry eye in the audience, I am sure.
The Youth winner of the Sybil Shack Youth Award was a grade 11 student from Balmoral Hall School, Krupa Kotecha. She was chosen for her tireless fight against racism and discrimination. She is the daughter of East Indian-Ugandan parents who were kicked out of Uganda during the crazy Idi Amin regime. Krupa has made a video about race bullying in schools and has done dramatic performances all having to do with raising awareness of racism. She was nominated by a teacher in the school.
The International Human Rights Day Luncheon has been sponsored for many years by the joint efforts of the Manitoba Human Rights Commission, Canadian Human Rights Commission and the Manitoba Association of Rights and Liberty. This year the event was held at the Radisson Hotel and was well attended.
Posted by Unknown at 4:05 PM No comments: