ATLANTA - Premier Gary Doer is promoting Manitoba as a major hub of knowledge, research and innovation at the 2009 BIO International Conference, where he is leading a delegation that includes more than 30 leaders from the province’s life-sciences industry, research and post-secondary education sectors.

Manitoba has had one of Canada’s fastest-growing life-sciences industries in recent years, Doer noted, and the province’s position as a hub for the knowledge economy has been recognized internationally by companies like California’s Amgen, which awarded $250,000 for research-based activities in Manitoba at BIO 2008.

“The work done by the life-sciences and biotechnology industry is not only critical to finding solutions to some of our greatest challenges, it is essential to our continued economic growth,” Doer said. “Knowledge and innovation attracts private-sector investment, creates highly skilled jobs and builds the economy of tomorrow.”

There are over 40 private-sector companies operating within Manitoba’s life-sciences industry, employing over 2,300 people in the knowledge economy. Leading private firms include Cangene, Canada’s largest biotechnology company, Smith Carter Architects, builder of most of the world’s level 4 labs, Biovail, a specialty pharmaceutical company with its manufacturing facility in Steinbach, as well as Apotex, Vita Health, Imris and Monteris.

There are also 30 research and development facilities employing over 1,900 people. These institutions include the Canadian Science Centre for Human and Animal Health (Canada’s equivalent of the Centers for Disease Control in Atlanta), the Richardson Centre for Functional Foods and Nutraceuticals, the National Research Council’s Institute for Biodiagnostics, the St Boniface Research Centre, the Siemens Institute at the Health Sciences Centre and the Manitoba Institute of Cell Biology.

Recent support for the industry was contained in Budget 2009, which announced the Manitoba Research and Development Tax Credit will be made refundable for corporations that work on new technologies with research institutes in Manitoba. At 20 per cent, Manitoba has the highest research and development tax credit in the country.

Doer also announced during one of his speeches that the province is supporting Manitoba researchers by investing more than $750,000 in four projects that range from improving the quality of biofuels to fighting diseases like diabetes and HIV. He noted that Manitoba researchers are internationally recognized for their contributions to biotechnology and research collaboration.

“It is important to think beyond our borders and work globally in the areas of science and technology,” Doer said. “This announcement builds on government’s long-term commitment to promote Manitoba’s internationally renowned research sector and support the work of Manitoba talent.”

The projects include $315,000 to create more sustainable biofuels, $280,000 to develop a blend of omega-3 fatty acids for poultry meat and eggs, $100,000 to better understand the interaction between particular proteins and inhibitory receptors and their effect on destroying HIV-infected cells, and $55,000 to develop novel food products that will help reduce Type 2 diabetes.

YouTube - Maiko Watson - Sweet Vibration
Posted by Unknown at 10:35 AM No comments:

YouTube - Maiko Watson - Sweet Vibration
Posted by Unknown at 10:34 AM No comments: 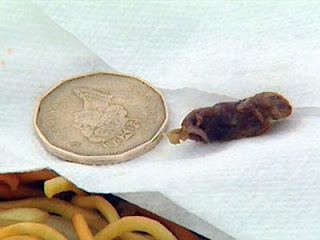 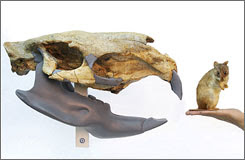 The big news in Winnipeg, Manitoba is the rodent stir-fry served up at Sizzling Wok a fast food restaurant in St. Vital Mall. It happened a few days ago, a couple found this extra protein they did not bargain for. No one knows how the rodent got into the stir fry.
This will be gross negligence on the part of the owners if they could not find a rodent while washing the vegetables or don't ever wash their vegetables especially if they are bought in plastic bags.
As for me, I wash everything that goes into my pot, even mushrooms - although some say you do not have to wash mushrooms - well this is what can happen when we become slap dash with food that goes into the stomach.
The restaurant was closed for a day or two but now its back in full swing and no one knows whether this rodent ended up in the food because of poor kitchen hygiene or by some other fluke. I definitely will never eat from the location again. This is gross negligence. The eaters must be scarred for life!
Posted by Unknown at 4:20 PM No comments:


May 14, 2009
Work Is Never Done, Obama Tells Class
By PETER BAKER
TEMPE, Ariz. — President Obama traveled Wednesday to the university that does not think he has done enough to merit an honorary degree and declared that he agreed.

Mr. Obama delivered his first commencement address as president at Arizona State University, whose decision not to award him a ceremonial diploma touched off a national furor. He used the controversy to make the point that no one should be satisfied with “the outward markers of success,” either as individuals or as a country.

“I come here not to dispute the suggestion that I haven’t achieved enough in my life,” Mr. Obama told tens of thousands of students and relatives packed into Sun Devil Stadium. “First of all, Michelle concurs with that assessment. She has a long list of things I have not yet done waiting for me when I get home.

“But more than that,” he added, “I come to embrace the notion that I haven’t done enough in my life. I heartily concur. I come to confirm that one’s title, even a title like president of the United States, says very little about how well one’s life has been led — and that no matter how much you’ve done, or how successful you’ve been, there’s always more to do, always more to learn, and always more to achieve.”

The decision not to award an honorary degree to Mr. Obama was taken by many as a snub, especially after university officials explained that “his body of work is yet to come.” Embarrassed university officials tried to contain the damage by renaming its most important financial aid program the President Barack Obama Scholars Program, which will benefit 1,600 freshmen this fall.

The university’s president, Michael Crow, heaped praise on Mr. Obama in introducing him on Wednesday night. “You’ve lit a fire under all of us to move America forward,” Mr. Crow said.

Mr. Obama thanked him and called the controversy “much ado about nothing.” But he still aimed a barb at the university’s leadership. “President Crow and the board of regents will soon learn about being audited by the I.R.S.,” he joked.

Mr. Obama’s commencement season schedule this year has generated more attention than most presidents receive. His plan to speak at the graduation at Notre Dame on Sunday has drawn vociferous protests from anti-abortion leaders who consider it inappropriate for him to be invited to speak at the nation’s most prominent Catholic university.

In his speech here to a stadium full of people who waited hours in temperatures hovering around 100 degrees, Mr. Obama said the degree controversy underscored that the nation needs “a fundamental change of perspective and attitude,” one that values substance over appearance, character over celebrity and wise investments over “get rich quick schemes.”

The country, he suggested, has lost its way. “In recent years, in many ways, we’ve become enamored with our own success, lulled into complacency by our own achievements,” he said, citing the economic crisis. “We started taking shortcuts. We started living on credit, instead of building up savings. We saw businesses focus more on rebranding and repackaging than innovating and developing new ideas that improve our lives.”

He cited Americans who ran the Underground Railroad, fought for worker rights, developed new technology and saved people caught in the World Trade Center on Sept. 11, 2001. “A whole bunch of them didn’t get honorary degrees,” he said in an ad lib not in the released text, “but they changed the course of history and so can you.”

He added: “That’s what building a body of work is all about: it’s about the daily labor, the many individual acts, the choices large and small that add up over time, over a lifetime, to a lasting legacy.”
Posted by Unknown at 3:43 PM No comments:


Manitoba will continue to lead the way in creating public awareness and fighting the sexual exploitation of children with the launch of a public awareness week, Family Services and Housing Minister Gord Mackintosh announced today.

“Children need our help and we’re going to be there for them,” said Mackintosh. “By launching this annual public awareness week, we want to make every Manitoban aware the problem can be addressed if we all work together.”

Manitoba recognizes this issue will require ongoing awareness and a continued commitment to highlight the issue of child sexual exploitation, so May 11 to 15 has been proclaimed Stop Child Sexual Exploitation Awareness Week, said the minister. A Stop Sex with Kids campaign will run on radio and TV throughout the week to raise awareness about Manitoba’s sexually exploited children. The campaign will also run on Winnipeg Transit vehicles through the month of May.

“The sexual exploitation of children is a growing problem and one that cannot be ignored. This dedicated week to raise awareness is an important step in the right direction,” said Lianna McDonald, executive director of the Canadian Centre for Child Protection. “We must not tolerate the abuse of children, and adults must take responsibility to prevent these crimes from happening. We encourage the public to learn more about the issue and what they can do to help reduce child victimization by visiting our website at www.protectchildren.ca.”

This targeted awareness campaign coincides with the Canadian Centre for Child Protection’s annual Missing and Exploited Children Conference (MECC) taking place May 12 to 14 and builds on the strong foundation of programs and resources introduced last December in Manitoba’s $2.4-million strategy to end child sexual exploitation called Tracia’s Trust, said Mackintosh. Supported by the Manitoba government, the MECC brings together law enforcement, social workers, educators and prosecutors for three days of intensive training in the areas of missing and exploited children including the detection and investigation of child victimization and Internet-related exploitation. Participants share their expertise, experiences and challenges with colleagues and investigate ways to better protect Canadian children.

During Manitoba’s first Stop Child Sexual Exploitation Awareness Week, Mackintosh today announced support for a total of 19 new specialized beds including 12 for transitional support for youth. A new four-bed specialized foster home in Winnipeg will be established for sexually exploited female youth and young adults who are transitioning out of child and family services care. Three new emergency foster-care beds will also be opened in a rural location for high-risk and sexually exploited children who might benefit from time away from the lure of street life in Winnipeg. These seven additional foster-care beds are an expansion of the current specialized foster-care program for sexually exploited children called Our Relatives Place, operated by Ka Ni Kanichihk Inc.

Since the December 2008 announcement of Tracia’s Trust, work has been underway on a number of initiatives including:
• High-risk victims training for more than 140 representatives of child welfare, police and community agencies in February 2009.
• A northern forum on Standing Together: Communities Taking Action Against Sexual Exploitation on March 24 and 25 in Thompson.
• Funding in 2009-10 for Kapaapako Miikiwaap Lodge Teachings. Training sessions have been scheduled in Manitoba for the spring and fall of this year.
• Annual funding of $280,000 for the Transition, Education and Resources for Females (TERF) Mentor Program in 2009-10.
• Program funding of $292,000 for Ka Ni Kanichihk’s Restoring the Sacred program – Student Buddy Support Service, a peer mentor training program for at-risk youth between the ages of 14 and 21 who are coming to Winnipeg to attend high school.
• Mandatory reporting of child pornography – another Canadian first – to increase police and child and family service (CFS) interventions.
• A new CFS prosecution strategy through an effort between police and child welfare to target predators who harbour runaways or otherwise interfere with children in care.
• StreetReach, a Winnipeg co-ordinated effort aimed at helping youth escape exploitation, preventing high-risk runaways from becoming exploited and better identifying predators, prostitution and drug houses. Partners involved are finalizing the program details for implementation in summer of 2009.
Posted by Unknown at 3:10 PM No comments:

THE SKIN - A HAMA Film
Posted by Unknown at 7:00 AM No comments: