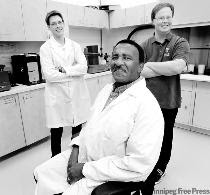 John Jack Retired Principal of Andrew Mynarski Schoolbut not Tired
Over the course of John Jack's 40-year teaching career he saw many of his students go on to successful futures as scientists, engineers and doctors.
Although Jack said it was their strong drive that got his students to where they want to be, he likes to think that participating in science fairs helped them along their path, developing special skills and confidence.

Involved as a volunteer with science fairs for the past 35 years, Jack believes so strongly in what the competitions can do for students that he now serves as the president of the Manitoba School Science Symposium, as well as the co-chair of the upcoming Canada-Wide Science Fair.

The national science fair will be held in Winnipeg for the first time since 1988, from May 9 to 17, hosting more than 450 competitors. Despite retiring as a principal five years ago, Jack said he loves that he still has the opportunity to shape students' futures.

"I get satisfaction knowing that I continue to do what I can to provide the opportunity for youngsters, because I know from the Third World country where I am from, many of the students there would have wished that they had this type of opportunity," said Jack, who came to Canada from the Caribbean country St. Vincent in 1969.

Now, in addition to trying to make a difference in the lives of students, the Order of Manitoba recipient is also working to groom the next generation of volunteers.

Alastair Komus, 26, is a former science fair participant, who now serves as the co-chair of the Manitoba School Science Symposium and the volunteer co-ordinator for the Canada-Wide Science Fair. An engineer-in-training at Composites Innovation Centre and a University of Manitoba masters student, Komus credits his participation in the fairs for his academic success, and said that he has enjoyed working with Jack for the past few years.

"Having been a student involved, and realizing how important it was to where I ended up going, (it's important) to then give back to that and promote it," said Komus.

He said that a large number of former competitors now volunteer, including his brother Matthew Komus, who is helping as the assistant volunteer co-ordinator. "I think for a lot of people it made a difference too, they want to get back involved and help out and make it happen."

Jack said that it's people like Komus who will ensure that the events continue and the calibre remains high, especially since Manitoba has a big reputation to uphold.

"1988 was one of the best science fairs ever so we are hoping we can continue that tradition," said Jack, one of only two people from the 1988 organizing committee still involved.

Volunteers are required to fill a number of positions for the Canada-Wide Science Fair. Orientations will take place on May 2 at 2 p.m. and May 3-4 at 7 p.m.

Assessing President Barack Obama
This article is a personal view of how President Obama has performed his job so far.
http://www.associatedcontent.comarticle/1670467/assessing_president_barack_obama_.html
Posted by Unknown at 6:42 PM No comments:

CBC Manitoba | EAL
Posted by Unknown at 9:55 AM No comments:

Lured at 13: Held Captive As a Sex Slave - Oprah.com

The Baha'i Encyclopedia Project
Posted by Unknown at 12:23 PM No comments:

Labels: Baha'i encyclopedia, information-resource
Encyclopedia Project achieves a major milestone today, April 9, 2009, with the launching of a website featuring a gradually expanding selection of articles for the study of the Bahá’í Faith: http://www.bahai-encyclopedia-project.org/. The articles cover a range of topics in the categories of history, biography, teachings and laws, administration and institutions. All the articles bring together information from a variety of sources, many of which can be found only in research libraries and archives. The historical and biographical entries, in particular, include much material that has never been published or has not been available until now in English. Every attempt has been made, within the limits of available resources, to present the articles in an attractive and user-friendly format and to make it possible to update and improve them over time.
Posted by Unknown at 11:40 AM No comments: 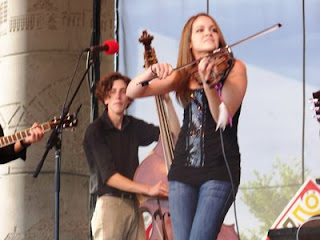 
I wanted to let all of you know about some really exciting news that has been building up for the past little while!


A few months ago, I got called by Maple Music Records with the idea of doing a music video for the single off of my recently released vocal album "Possibilities." There were two directors I was given names of to look up and choose from, one of them was Jeth Weinrich.
Jeth has received 3 Juno awards for his music videos for artists such as Jann Arden ("Good Mother" and "Insensitive"), Junk House ("Burned Out Car"), and also has worked with Chantal Kreviasuk, Van Halen, and Chris Issak. When I started searching some of Jeth's work on the net I was blown away. Not only is he one of the world's best music video director's but he is a breathtaking film maker and a true to the core artist.. I knew right away that I wanted him to do my video. Turned out that he had fallen in love with my song (which I wrote with the wonderful Chris Burke-Gaffney and Keith Macpherson) "Possibility" just as much as I fell in love with all of his work. We connected instantly in the creative sense and quickly became very good friends.


After all of the edits of his treatment for the video (which I will have to sometime put up on myspace and facebook, etc for everyone to marvel in its brilliance) were finished, Maple Music sent it to CMT Canada's Video Assistance Program. CMT loved the idea and the song, gave us some necessary funds to get it done, and we flew down to Los Angeles! :)


We shot for 3 days. In the hotel room, downtown LA, and out near Palmdale in the beautiful barren desert of California. We ended up with around 7 hours of footage...that means about 120 times through a 3 and a half minute song!!! Needless to say I had no voice by the end of it having refused to "lip sync" the song while shooting.


I also had another once in a lifetime opportunity while I was down there. I had the chance to work with Jeth's best friend, photographer Raphael Mazzucco. Raphael has been named one of the top 10 fashion photographers in the world. His major campaigns for clothing company's such as Guess Jeans have been considered to be some of the most influential campaigns in fashion history. He has shot the cover of Sport's Illustrated Swimsuit more than once. He is truly unreal. And guess what!? He's Canadian!
When Jeth played him the single, "Possibility," he called me himself and told me how much he loved it and asked me if I would want to do a photo shoot with him while we were down in Los Angeles shooting the video. I said no. ...just kidding! I was so honoured and excited and well simply shocked.


That photo shoot was one of the most amazing experiences of my life. I felt myself being welcomed into this whole new level of the world. I felt that way the whole time I was down there, working with both Jeth and Raph.


Aaaanyway. Fast forward to today. After this past week of editing and re-editing of the video, it looks AMAZING. I could not have imagined a better video for this song.


To top how excited Jeth, and Maple Music, and I are about this beautiful video, CMT is just as excited! Got some amazing feedback from them on it the other day!


So before you start thinking "man this is a loooong email, tell us where and when we can see it"...it will start airing on CMT in less than two weeks! I will be sending out another one of these messages when I have a firm date (and maybe even a time) of when you can see it on air.


I want to take this moment to thank you all for your continuous support over the years...I know there are some musicians that I play with on the "TO:" list on this email as well, so thanks to all you guys for being there for me and helping me get to where I'm going!


What else...the album...it's called "Possibilities" and it's available on iTunes, as well as online at the following sites:


You can follow up on the happenings here (including some blogs and videos from LA):


If you would like to be added to my regular email "newsletter", simply send a quick note with "SIERRA'S NEWSLETTER" in the subject box to "sierra@sierranoble.ca"


I would also love it if all of you who can could forward this message on to everyone/anyone you can, it's a really exciting and important time for me in my career and I need all the help and support I can get from anyone that I can get it from!


Another thing you can do if you would like to help, is to request "Possibility" on your favourite local radio station as well as the video on CMT Canada!
You could also request any local music carriers across Canada to start carrying my album in store.
Popular request is what is driving this industry these days it seems, so I'll accept all of the help I can get from all of you wonderful folks out there!


Thanks so much for taking a couple minutes to read this,


p.s. If you haven't yet heard the single! You can listen to it here: myspace.com/sierranoble

Posted by Unknown at 6:55 AM No comments: 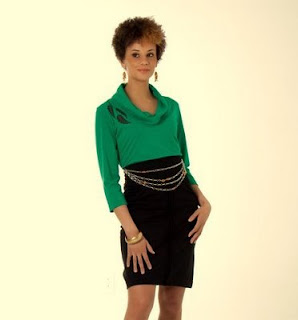 MAIKO WATSON DOES A PRE-CD LAUNCH AT LE GARAGE IN ST. BONIFACE


Winnipeg Singer/songwriter, Maiko Watson will be doing a solo act at Le Garage night club at 166 Provencher in St. Boniface on Thursday April 9, 2009. Watson, a former popstar, will be trying out some of her new songs she wrote and produced herself. She will be accompanied by Keith Price, Curtis Nowosad and Julian Bradford
$10 admission at the door - includes a sampler CD of her upcoming release "Take Me For A Ride".
Check out her songs at www.maikowatson@myspace.com
Posted by Unknown at 9:24 AM No comments: