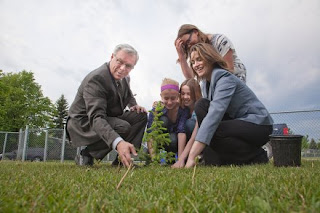 Premier Greg Selinger is joined by (r) Erin Selby, Minister of Advanced Education and Literacy and students from Shamrock School as the Province marked Environment Week and the UN International Year of Forests with an additional $1.23 million to plant an extra 1 million trees in the Trees for Tomorrow campaign.
June 7, 2011

The Manitoba government, in acknowledgment of Canadian Environment Week, will provide an additional $1.23 million to plant an extra one million trees for the successful Trees for Tomorrow campaign, Premier Greg Selinger announced today.
“Planting trees is good for people, wildlife and our environment,” said Selinger.  “This is the UN International Year of Forests and we are proud to raise awareness of our efforts to sustainably manage, develop and conserve all the different types of forests in Manitoba including the world’s last intact southern boreal forest on the east side of Lake Winnipeg.”
As part of the Manitoba government’s plan to reduce greenhouse-gas emissions, Trees for Tomorrow was launched in 2008.  The province is now committed to plant more than six million trees in Manitoba by 2012.  So far, Manitobans have planted or been provided with almost three million hybrid poplar cuttings and conifer seedlings.
Most of the seedlings are grown at the province’s Pineland Forest Nursery in Hadashville and provided by the province, with the Manitoba Forestry Association assisting in the delivery of the program.  The program contributes to the UN’s Billion Tree Campaign and also offsets local carbon emissions that contribute to climate change, said Selinger.
In 2010, a total of almost 1.4 million trees were planted or provided by the Trees for Tomorrow program.  In addition, many plantations and shelterbelts were established on woodlots and other private lands throughout Manitoba.  A large number of trees have been given away to the public and last year major tree-planting initiatives such those at the floodway in Winnipeg and Fort Whyte Alive were completed.
Any landowner who is interested in planting trees on their property can visit the Trees for Tomorrow website at www.gov.mb.ca/conservation/forestry/t4tor contact the Manitoba Forestry Association.
Depending on the parcel of land and on the plan developed, Trees for Tomorrow could provide free seedlings, site preparation and tending for the young trees.
Also in acknowledgment of Canadian Environment Week, premier announced the province is launching Manitoba’s new air-quality website.  The site provides information on locations where air quality is measured on a continuous basis using the air-quality health index for sites where it is reported and other online information.
“Clean air is essential to our health,” said Conservation Minister Bill Blaikie.  “The province is committed to making sure air-quality information is easily available to Manitobans and that we take the steps necessary to keep our air clean.”
More information on Trees for Tomorrow can be found under Forestry Branch at www.manitoba.ca/conservation, Green Manitoba’s Sustainable Development Initiatives Directory at http://msid.ca/landing/ and at the Manitoba Forestry Association’s website at http://www.thinktrees.org/ under Programs.
Manitoba’s new air quality website can be found at http://www.manitobaairquality.ca/.