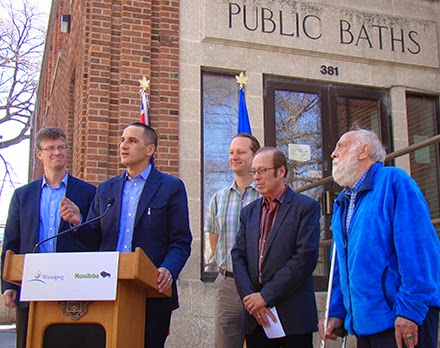 Kevin Chief, Minister of Children and Youth Opportunities and minister responsible for relations with the City of Winnipeg within the Department of Municipal Government announced $1 million in funding from the province for renovations to the Kinsmen Sherbrook Pool. The province and city also announced more than $421,000 in additional joint funding through the Building Communities Initiative (BCI)

Winnipeg, MB—A partnership between the Province of Manitoba, the City of Winnipeg and the Kinsmen Club of Winnipeg is providing more than $4 million in funding to return the Sherbrook Pool to its place as an important health and fitness facility for Winnipeg’s core area communities.
“For decades, the Sherbrook Pool has been an important site for water fun, sports and fitness programs benefiting people of all ages, from children and youth in the Sharks Swim Club to seniors, and we will help to ensure the legacy continues,” said Children and Youth Opportunities Minister Kevin Chief, minister responsible for the City of Winnipeg. “Water activities are an excellent form of recreation, supporting health and fitness and a great way for families to enjoy their time together.”
Renamed the Kinsmen Sherbrook Pool, funding for the renovation project includes $1 million from the province through the Manitoba/Winnipeg Infrastructure Agreement (MWIA), more than $421,000 in cost-shared funding from the Building Communities Initiative II (BCI II) between the province and the city, approximately $1.7 million from the City of Winnipeg, and a $1-million Sponsor Winnipeg contribution from the Kinsmen Club for enhancements.
“Affordable recreation opportunities in Winnipeg is our priority and I am very proud that we have worked together along with the community to reopen the doors to the Kinsmen Sherbrook Pool so we can get families and aquatics lovers back in the water,” said Mayor Sam Katz. “I want to thank the Province of Manitoba for their commitment to this facility and to the Kinsmen Club for their support as inspiring corporate sponsors."

Rehabilitation of the Sherbrook Pool will include structural repairs to the roof, support beams and pool tank, mechanical repairs to the water service, drainage and heating, ventilation and air conditioning (HVAC) systems, electrical and fire alarm system upgrades as well as change room improvements.

The Sherbrook Pool was closed in 2012 for safety reasons following inspections that detected structural concerns with the building, which is more than 80 years old. Repairs to the building systems and structure are estimated to require 9-12 months, with a goal of re-opening in late 2015/early 2016.

The BCI is a multi-year, cost-shared capital initiative developed jointly by the Manitoba government and the City of Winnipeg.  The goal of the funding is to support community revitalization through improvements to local infrastructure in targeted older neighbourhoods and contribute to the vitality, safety and health of communities throughout the city.

Sponsor Winnipeg is a partnership program which provides public-spirited individuals, businesses, corporations, foundations and community groups with opportunities to sponsor a wide variety of City of Winnipeg assets and programs, in return for naming rights, legacy opportunities and other marketing benefits associated with sponsorship of City facilities and services. This continuing program supports the City’s commitment to deliver high-quality services to the citizens of Winnipeg by generating new revenue sources.