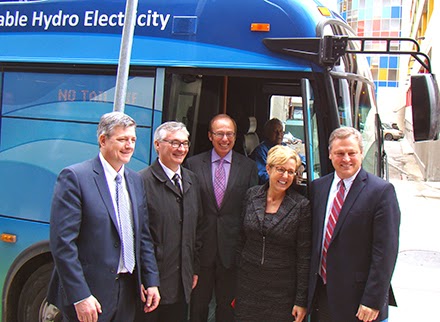 The prototype electric bus was developed through a partnership between the Manitoba government, Mitsubishi Heavy Industries (MHI), New Flyer Industries, Manitoba Hydro and Red River College (RRC).  The vehicle was tested extensively by the partners and has now passed the real-world test of operating in Winnipeg winter conditions.

“We are extremely proud of this partnership and the technology that resulted in this truly innovative electric bus,” said Minister Struthers.  “Testing a new unique on-route rapid charging system, which is the first in Canada, and moving the electric bus into regular service is a tremendous step forward for clean, green technology that is already catching the eye of various North American transit authorities. Reducing our dependence on fossil fuels is good for the environment, our health and business.”

“The return of electrically powered public transportation to the streets of Winnipeg is an exciting development for Manitobans and Manitoba Hydro,” said Scott Thomson, president and CEO, Manitoba Hydro. “During this initiative we were part of a team that developed a high-capacity charging system which is the first of itssize in Canada.  This charging system can fully charge the electric bus in under 20 minutes and can replenish the energy used during one hour of operation in under four minutes.  At Manitoba Hydro, we have to ensure that our electrical-distribution system will be able to economically and safely handle the impacts of more electrical vehicles.  This new bus is helping us assess that impact.”

“Having our first battery-electric, heavy-duty Xcelsior transit bus finish its year-long validation phase and enter daily service in Winnipeg, operated by our partners Manitoba Hydro and Red River College, and with the support of Winnipeg Transit will provide invaluable insights into day-to-day real-world operational issues.  This project, together with an additional six battery-electric buses currently being built by New Flyer, validates our view that electrification of transit buses is not a matter of if, but when.  We remain committed to our leading position in the market, technology, safety and reliability to ensure best value for the taxpayer,” said Paul Soubry, president and chief executive officer, New Flyer Industries.

“Red River College has a history of innovating, promoting and performing applied research in the sustainable transportation sector.  We are a leader in applied research in this country and we are proud that we could offer our deep technical expertise to this project,” said Stephanie Forsyth, president and CEO, Red River College.  “Working alongside Manitoba Hydro, New Flyer, Mitsubishi and the City of Winnipeg demonstrates how vital applied research projects are and how they can have an immediate real-world impact.  We look forward to our ongoing participation in this exciting project.”

Red River College instructors were involved in the assembly of the electric-bus battery and the system that connects the battery to the bus.  The charging system is activated when the bus drives up and a bar on top of the bus automatically lifts to connect to the charger.  The speed and efficiency of this charging system, which can replenish the energy used during one hour of operation in under four minutes, will benefit transit schedules and rider convenience.

“The City of Winnipeg is proud to partner with the Province of Manitoba, Manitoba Hydro, New Flyer, Mitsubishi and Red River College on this progressive and innovative project,” said Mayor Sam Katz.  “City council is committed to supporting opportunities that provide economic growth in our community and that showcase the leadership found in our city.  We’re eager to share Winnipeg Transit’s expertise with our project partners during the testing phase of this project and look forward to further testing four state-of-the-art electric buses later this year.”