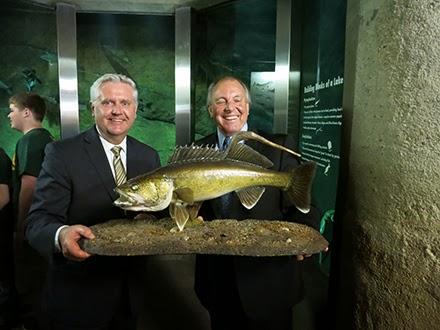 “Following extensive public input, Manitoban’s voices were heard loud and clear; they love to fish, and whether they call it a walleye or a pickerel, there’s no question this fish represents a huge part of our provincial history,” Minister Mackintosh said.  “From a child’s first fish, to one pulled in from a commercial fisher’s net, nothing represents a Manitoba catch like the walleye.”

Recreational anglers spend about $98 million on activities and supplies according to a 2010 survey and another $100 million is spent on other fishing-related purchases, which helps support Manitoba’s economy and tourism efforts, said Minister Mackintosh, adding the commercial fishery is also a vital part of the economy.  Walleye exports represent about two-thirds of the $29 million in annual income for commercial fishers.

Along with the provincial fish, the Manitoba government also added two more symbols that help define the province’s heritage and history.

The selection of a provincial grass was identified by a local committee who consulted with the public, carefully researched the suggestions and recommended Big Bluestem as a provincial symbol, said Minister Mackintosh.

Establishing a provincial fish, mammal and grass is consistent with TomorrowNOW, Manitoba’s Green Plan to establish the province as an eco-learning capital by working together to protect the environment while ensuring a prosperous and environmentally conscious economy.