Pomme is french for apple - LOL 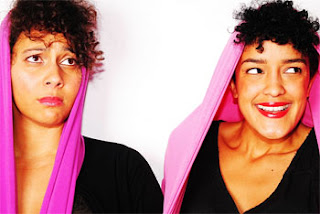 According to this reviewer:
Pomme is French for Apple is “a fresh and irreverent look at womanhood, sex, society, and all kinda madness in between”. It’s a series of vignettes about dating, sex and society with a distinct West Indian flavour. Bahia Watson and Liza Paul wrote, produced and perform the show. They work brilliantly together.
As funny as it is Pomme is French for Apple is also thoughtful. Megan said that one of the things she appreciated was that the didactic moments weren’t painful. I asked her what didactic meant. Merriam Webster says didactic means “intended to convey instruction and information as well as pleasure and entertainment”. I would have said that they didn’t hit you over the head with a message.

http://www.mooneyontheatre.com/2012/02/15/review-pomme-is-french-for-apple-bahia-watson-and-liza-paul/pomme/
Posted by Unknown at 8:37 AM