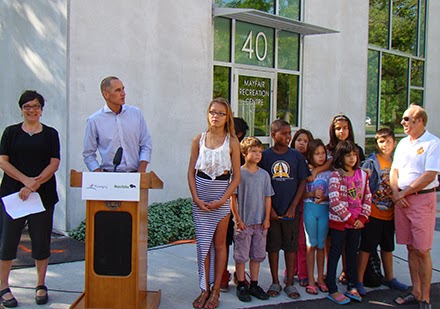 “This facility supports volunteers and community leaders who work to give families a sense of belonging in their neighbourhoods and provides young people opportunities to discover and grow their talents,” said Minister Chief.  “By working together on projects like these, we are building a city where the future is bright.”

The Building Communities Initiative II (BCI II) provided $1.5 million to the project, cost-shared equally by the city and province.  The City of Winnipeg also provided $800,000 from its capital fund.  Events at the site will include free-play programming and a variety of community-led activities by groups such as Winnipeg Harvest, Families Forward Pre-School Program, which is a provincially funded Healthy Child program, and Healthy Babies Group organized by the Women’s Health Clinic.

“Mayfair Recreation Centre serves the community by providing a safe place for youth and families to share in teaching and learning in the community kitchen, enjoy sports and recreational activities, and by providing much-needed space to community groups that support safe and healthy living,” Mayor Katz said.  “The City of Winnipeg is proud to partner with the Province of Manitoba to bring this invaluable neighbourhood facility to life.”

The new 3,600-sq.-ft., fully accessible facility is made of custom pre-fabricated concrete panels and includes a community kitchen, multi-purpose/skate change area, multi-purpose activity space, basketball nets and storage for Winnipeg Harvest.  Its design and construction has resulted in a Manitoba Hydro Power Smart Designation. The asphalt courts will be resurfaced and rink lighting will be added.  The skate bench in the multi-purpose space is made from reclaimed elm trees.

The BCI II partnership is a multi-year, cost-shared capital initiative developed jointly by the Manitoba government and the City of Winnipeg.  The goal of the funding is to support community revitalization through improvements to local infrastructure in targeted older neighbourhoods and contribute to the vitality, safety and health of communities throughout the city.

Phase One of BCI II provided a total of $10 million between 2010 and 2014.  Of the 38 approved projects under the first phase, 35 have been completed, with the remaining three to be completed in the 2014 construction season.

Phase Two of BCI II will provide an additional $10 million between 2013 and 2015.  An additional 46 projects have been approved under Phase Two, with 10 completed and the remaining to be completed in the 2014 and 2015 construction seasons.

Phase Three of BCI II will provide an additional $3.8 million.  Sixty per cent of the funding for this phase is provided by the City of Winnipeg and 40 per cent is contributed by the Province of Manitoba.  Twenty-seven projects have been approved to date and will be completed in 2014 and 2015.