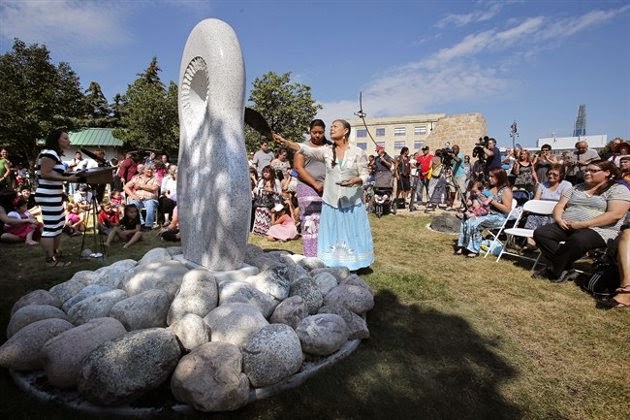 
Today, the Manitoba government unveiled a monument at The Forks in honour and recognition of missing or murdered Aboriginal women and girls in the province, Aboriginal and Northern Affairs Minister Eric Robinson announced today.

“This is a very important day for families of Manitoba’s missing and murdered Aboriginal women and girls as we unveil a monument in their honour and recognition,” said Minister Robinson.  “Manitoba continues to support families who have tragically and violently lost a loved one in a very tangible and symbolic way with the installation of this monument and we continue our community partnerships on this most critical issue.”

The monument aesthetically, symbolically and physically represents and honours Manitoba’s missing and murdered Aboriginal women and girls, the minister noted.

“Many families have no place to honour, grieve or celebrate their loved one. This monument offers such a space to families and community seeking to honour Aboriginal women and girls who were sadly taken from their families,” Minister Robinson said.

“Ka Ni Kanichihk is proud to partner with the Government of Manitoba on the development of this monument which stands as a testament to the need and benefit of community engagement and government partnership,” said Leslie Spillett, executive director, Ka Ni Kanichihk.

The monument, the first of its kind in Canada, marries both community and government partnership on the issue of missing and murdered Aboriginal women and girls while serving as an educational and public awareness mechanism to engage all Manitobans, Canadians and visitors in this most critical issue, Minister Robinson adde
Posted by Unknown at 8:49 AM