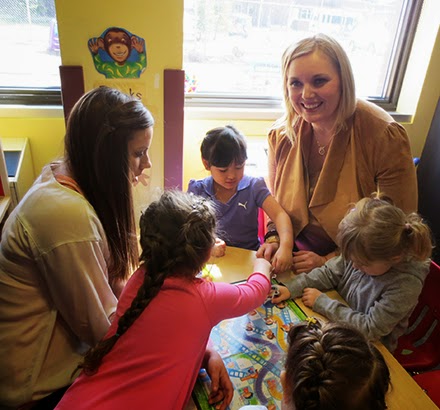 Family Services Minister Kerri Irvin-Ross, with children from Horizons Children's Centre in St. James, where she announced a new five-year plan to provide more high-quality child care for Manitoba families, along with 5,000 more funded spaces and $25 million to build or expand child-care centres

The Government of Manitoba is launching a new five-year plan to create more high-quality child care for families across the province including investing in 5,000 more child-care spaces and another
20 new or expanded child-care centres, Family Services Minister Kerri Irvin-Ross announced today.

“For parents, having access to affordable, high-quality early learning and child care makes a world of difference because it means they can focus on their jobs, training or education while knowing their children are safe and in good hands,” Minister Irvin-Ross said.  “As Manitoba’s population and economy continue to grow, we must keep investing in the future through a strong system of early learning and child care.”

In fall 2013, Deanne Crothers, MLA for St. James, undertook a series of public consultations on behalf of Minister Irvin-Ross, visiting communities across the province to hear Manitobans’ ideas about how to build a stronger system, the minister said.  The advice from parents, early childhood educators, centre directors, home-based providers and others, has helped to form the basis for Manitoba’s new five-year child-care plan, the minister added.


“Quality child care keeps Manitobans working and is an essential service for most young families,” said Pat Wege, executive director, Manitoba Child Care Association.  “It’s great that the new long-range plan will take us into the future by investing in new spaces, community-based facilities, the child-care workforce and a new strategy to ensure a modernized infrastructure on which to grow.”

“We are pleased the Manitoba government is continuing to invest in more child care and more
child-care centres,” said Allyson Cruise-Scarpino, executive director, Horizons Children’s Centre.  “High-quality child care is vital to parents who need to work to support their families and want to know their children are safe.”

“In the past, economic uncertainty meant deep funding cuts to child care in Manitoba with a complete freeze on new child-care spaces,” Minister Irvin-Ross said.  “Critics have again called for drastic cuts to supports families rely on, but we know that investments in the early years will give our children the strong start they need to be successful.”

The minister said that since 1999, the Manitoba government has laid a solid foundation to grow and build early learning and child care including: