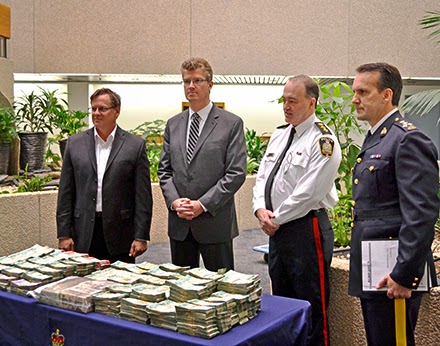 Two traffic stops have resulted in $960,000 being forfeited to the province, which will be redistributed to law enforcement and victims’ services through the Criminal Property Forfeiture Fund, Justice Minister Andrew Swan announced today.

“These are some of the largest successful forfeitures in the province’s history,” said Minister Swan.  “We continue to take very large sums of money out of crime and reinvest that money across the province, supporting victims, police and public safety programs.  Our ultimate goal is to reduce crime and keep our communities safer.”

“Each and every seizure or investigation sends a message and makes a difference,” said Assistant Commissioner Kevin Brosseau, commanding officer of RCMP “D” Division.  “Fighting crime is a joint effort.  The RCMP works closely with government, police services, communities and organizations to ensure a safer Manitoba.”

“Working in partnership with the province continues to show great results,” said Chief Devon Clunis, Winnipeg Police Service.  “We will continue to work together to protect our communities and ensure that crime never pays.”

Last summer, over $1 million was distributed across the province to purchase specialized equipment, provide important training opportunities for officers and support community-based crime reduction programs.  The province’s victims’ services branch also received funding to support its work.  Another series of grants funded through this program is expected to be announced in the spring.

More than $7.3 million in assets have been successfully forfeited to Manitoba through criminal property forfeitures since 2010.  There are currently more than 150 forfeiture files being pursued involving vehicles, properties and cash, the minister said.