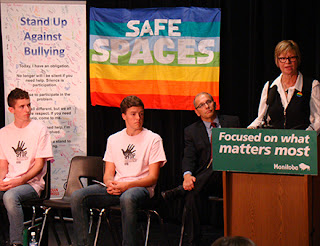 – – –
Province Proclaims Bill 18, the Safe and Inclusive Schools Act
Manitoba schools now have more tools to fight bullying and cyberbullying and are able to create safer, more inclusive schools, said Education Minister Nancy Allan as she announced Bill 18, the Safe and Inclusive Schools Act, was officially proclaimed into law today.  The minister made the announcement while talking with students at Kelvin High School’s gay-straight alliance.
“Every parent knows the impact that bullying can have on their children and their ability to learn.  In recent years, the face of bullying has changed so much with the spread of cellphones and social media, and parents expect action,” said Allan.  “That’s why I am proud that we have a new law in Manitoba that builds on our Safe Schools Charter to protect every child from bullying online and in the classroom.”
Under Bill 18, schools in Manitoba will be required to:
To support schools with developing diversity policies, the province will hold seminars with school administrators this fall.  The province is also partnering with the Egale Canada Human Rights Trust to develop resource kits for teachers and schools to assist and support students who want to form gay‑straight alliances in their schools.  The province will also provide training for teachers and other staff about bullying prevention and strategies for promoting respect for human diversity and a positive learning environment, the minister said.
In addition, the province is requesting that Appropriate Use of the Internet and Human Diversity policies be in place in all school divisions and funded independent schools by June 30, 2014.
Some school divisions have already developed policies that relate to respect for human diversity and homophobic bullying including the Winnipeg, Louis Riel and Seven Oaks school divisions.
“While great work is already going on in many Manitoba schools and school divisions, the proclamation of Bill 18 and the requirements it puts in place will strengthen and expand that work throughout the province.  This sends a clear message that all have the right to teach and learn in schools that are as inclusive and supportive as we can make them,” said Paul Olson, president, Manitoba Teachers’ Society.
“Bill 18 is part of an anti-bullying strategy that we launched a year ago.  Despite opposition from some politicians, we’re taking the next step forward to protect every child by giving students, parents, educators and administrators more of the tools that they need to deal with bullying,” said Allan.
Manitoba’s anti-bullying action plan includes: